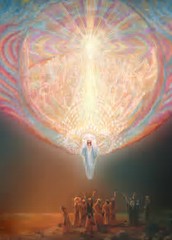 Some time ago, a girl at the office and I had a wonderful discussion about death, funerals . . . and the life hereafter.  Life after death—immortality and spirituality—seemed to be on both our minds that week with the passing of my Aunt Helen.  Death and religion are topics that go hand in hand due in part by the mystery of ‘not knowing’.  If I were one of the nonreligious folks out there and picking out a new religion today, I think I would want one that spoke with clarity and authority about life beyond the grave especially since we all seem to be just a nudge closer with all the terrorist attacks we’ve been experiencing lately.       But ironically, if we were to take a few months and study the writings of other religions, we would discover that the history of all their founders stops . . . abruptly with their death.  Like everyone else, their bodies have all wasted away in the grave. What do you suppose Buddha (Budism), Mohammed (Islam), and Krishna (Hindus) are doing now?  What do you suppose are their plans for the future? Not even their most devoted followers would know the answer.      But, the Christian faith is different. The written record of God’s Word and countless eyewitnesses confirm that Jesus Christ was God’s Son. He died on the cross for the sins of the entire human race. God raised Jesus from the dead bodily. These are the facts that set Him apart from every other religion in the world. The question remains—can He speak with the authority that we need, about life after death?      Several years ago a bank in Binghamton, New York sent a floral arrangement to a business that had recently moved into a brand new building . . . but there was a mix up at the florist, and the card sent with the arrangement read, “With our deepest sympathy.” The florist apologized, but became even more embarrassed when he learned that the floral arrangement he sent to a funeral home read, “Congratulations on your new location.”      The Church has good news for you, today (and every day for that matter). After Jesus’ resurrection from the dead, He moved to a new location. He ascended into heaven! And that is, in part, what we celebrate this week.  In out Epistle this morning we read . . . “And after He had said these things, He was lifted up while they were looking on, and a cloud received Him out of their sight. And as they were gazing intently into the sky while He was departing, behold, two men in white clothing stood beside them; and they also said, ‘Men of Galilee, why do you stand looking into the sky? This same Jesus, who has been taken up from you into heaven, will come in just the same way as you have watched Him go into heaven.’”      The disciples of Jesus visibly saw Him rise from the ground. The Lord, clothed in His resurrected body, moved from this material world into the spiritual world. His followers were stunned! Two angels appeared to them and told them that Jesus had been taken up into heaven.  Life would go on for these disciples, but of course, they would never be the same again. The ascension of Jesus Christ changed everything for them . . . and for us.

We who are left . . . continue, as is our duty, to keep forever the jubilation of Christ’s Easter resurrection and to live out in joyful expectancy, Christ’s imminent return.

But we wonder; how can we do that?  How is it possible to live out our lives in expectant jubilation in a world that is so fraught with hatred, problems and abuse?  It is only possible because the Holy Spirit is here within us.  Jesus told his followers that if he didn’t return to heaven, the Holy Spirit would not come.  But because he went to the Father, the Holy Spirit was given to all those who believe to strengthen and to help them in this world.  We call this help and consolation ‘Grace’ and the ability to reflect it in our lives we call ‘Spirituality’.

Spirituality is what sets the believer apart from the world.  Another word might be ‘holiness’ but it is too often misunderstood as ‘religious’.  You may not be able to practice religion in your school or workplace . . . but you are always able to practice your Spirituality.  Spirituality is that nagging something that sets one person apart from another.  You can’t quite put your finger on it but there is definitely, something there.  You might recognize it as inner peace, or a sense of calmness in demeanor.  It might come as abundant generosity or loving concern.  It might come in a hundred ways that are impossible to describe . . .  but what you do sense is a definitive difference in that person.  A person of God’s own choosing . . . someone set apart from the world . . . and yet in the world.

One of the truly inspired ways to grow as a Christian is to create a bridge between one’s Spirituality and one’s Work.  Right or wrong, people today are defined by what they do for a living.  Students, doctors, pharmacists, laborers, housewives always tell us what they do when we meet for the first time.  It seems to be some kind of a defining signal between people.  So why not take advantage of it and make Spirituality more a part of your defining signal?

When I suggest that spirituality become a more integral part of your life, I can almost hear the reply, “I’d love for that to hap­pen but I’m just too busy, I have to go to work.” If that sounds familiar, this is a strategy I have found helpful:

To create a bridge between your spirituality and your work means that you take the essence of who you are and what you believe into your daily work life. You dismantle the dichotomy that so often exists between your spiritual life and that which you do for a living.  It means that if kind­ness, patience, honesty and generosity are spiritual qualities that you believe in, you make every effort to practice those qualities at your workplace. You treat people with kindness and respect. If someone is late or makes a mis­take, you try to be patient.  Even if it’s your job or appropriate to repri­mand someone, you do so from a place of love and respect. You should be as generous as you can be—with your time, money, ideas, and love.

In a way, our place of work is a perfect environment to practice spirituality. If you work in a place like I do, on any given day you have many opportunities to practice patience, acts of kindness, and forgiveness. You have time to think nice thoughts, smile, embrace others, and practice gratitude. You can also practice being non-defensive and a better listener.  You can try to be compassionate, par­ticularly with difficult or abrasive people. You can practice your spirituality in virtually everything that you do. It can be found in the way you greet people and deal with them in conflict. You can exhibit it in the way you sell a product or service—or the way you balance ethics with profit. It’s literal­ly everywhere.

I have found that there is something really comforting about creating this spiritual bridge. It reminds me of a higher purpose, a higher calling as a Christian in the service of God. It puts your problems and concerns into a broader context. It helps you grow from your difficult experiences rather than becoming hopeless or overwhelmed by them. Even if you have to do something terribly difficult such as firing someone, for example, you do so while remembering your humanity Or even if you are fired or dealt some other tremendous “blow” or hardship, there is a part of you that knows there is a reason. Having faith helps get you through difficult times. It doesn’t mean that difficult times become easy—they just become a little more man­ageable.

One of the nicest things that happens to people as they create a bridge between their spirituality and their work is that “small stuff’ real­ly does begin to seem like small stuff. Invariably, the same things that used to drive you crazy don’t seem at all significant. You’ll be able to take things in stride, move forward, and stay focused. So, in a roundabout way, becoming more spiritual at work or school helps you become even more successful than you already are.

The important lesson for all of us to remember today is that this life is not all there is. Jesus Christ has spoken with clarity and authority about life after death. He ascended into heaven. He stepped from this world into the next world. He has left us . . . and yet we are not alone.  We are in the world, but not part of the world.  In the first century, the disciples were changed forever. We too should be radically changed ourselves as we strive to love others and to reflect the Holy Spirit in our lives and in our schools and workplace through a renewed sense of our Spirituality and what it truly means to be a Christian.  Amen