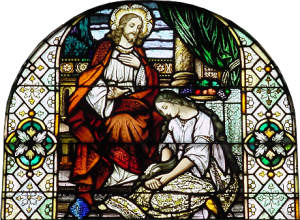 A few months back someone (I can’t remember who – so I might be a little off on the details) told me a story about a young lady who was teaching her friend how to cook a turkey.  She learned to cook a turkey using her family’s favorite recipe which was to cut off the drumsticks and to bake them separately in the oven next to the turkey.  Her friend thought this somewhat odd and asked why she did it this way.  The young lady responded that that is the way her mother taught her to cook a turkey.  This got a family discussion going to find out why this was done.  So they went and asked her mother why she did it this way, to which her mother responded, “well . . . that’s the way my mother taught me to cook a turkey” and so she always did it that way.  So finally when the whole family finally got together for Thanksgiving the subject came up again, so they went to the grandmother and asked her why she taught the mother to trim the drumsticks off the turkey before baking it.  To which she responded “well, that’s the way my mother taught me and so I always did it that way.”  So finally they went to the great-mother and asked her why this was done – to which she responded – “well deary . . . I had to do it that way because I didn’t have a pan large enough to cook a whole bird.”

The point of this story is of course that at times people get can get side tracked, through no fault of their own because of the way they were taught or because of some family tradition that may have developed over the years.  Eventually the tradition becomes so engrained that the original reason behind its meaning is lost – sometimes forever.

That is exactly what had happened to the religion of the Hebrews at the time when Jesus came to earth.  The Jewish religious leaders had so enshrined the traditions of their faith and the letter of the law into their lives that they had completely forgotten the meaning behind the religion that they preached.  This difference was what Jesus came to correct and it is why he would eventually be executed by the religious leaders of the day.

The scribes and the Pharisees believed that the changes Jesus preached of were blaspheming the essence of the law of Moses as they had received it; which they were practicing to the best of their ability.  What they didn’t know, and what Jesus was trying to teach them, was that they had been so engrained in their tradition and in the letter of the law, that they had lost sight of the heart of the law which was given to the children of Israel as a way of making them a holy nation – set apart from the world – as a light to the nations in order to show the world God’s mercy and salvation for all mankind.

The Pharisees believed that the word of Jesus negated the law of Moses and the precepts on which it was founded and so they wanted him killed.  But Jesus spoke of his coming as the fulfillment of the law and not its removal.

The Pharisees and the Jews were not the only ones to get it wrong over the years.  John Stott, a noted evangelist, reminds us in his writings that ‘throughout its long and variegated career, the church has seldom cultivated a humble, sensitive attitude of listening to God’s Word.  Instead, it has frequently done what it has been forbidden to do, namely, it conformed to the world.  It has often accommodated itself to the prevailing culture, leaped on board all the trendiest bandwagons and has hummed all the popular tunes.  Whenever the church does this, it reads Scripture through the world’s eyes and rationalizes its own unfaithfulness.  Church history is full of examples.  How was it that the Christian conscience not only approved but actually glamourized the Crusades to recover the holy places from Islam – an historic blunder by the church which the Muslims have never forgotten and which continues to obstruct the evangelization of the Muslim world?  How is it that torture during the Spanish Inquisition could ever have been employed in the name of Jesus Christ to combat heresy and promote orthodoxy?  How is it that for centuries Protestant churches were so inward-looking and so disobedient to Christ’s Great Commission that they refused to preach the gospel in India, Africa or South America?  How is it that the cruelty of slavery and of the slave trade were not abolished in the so-called Christian West until eighteen hundred years after Christ?  How is it that racial discrimination and environmental pollution have become widely recognized as the evils they are only since World War II?  These are just some of the worst blind spots which have marred the church’s testimony down through the ages.  None of them can be defended from Scripture and all of them are due to a misreading of Scripture, or to an unwillingness to fall under its authority.      And so you see, even the church can succumb to blind heresy and questionable doctrine based on tradition and false teaching which continues in some places and in some churches even to the present day.  So it isn’t only the Jews who have gotten it wrong – it has been the Church as well.

Like all of the prophets in the Bible, Isaiah, in today’s reading was looking forward to the coming of the Messiah who would turn the hearts of the people away from what they were doing wrong, but towards the truth of what is real in the eyes of God.  As we heard read today . . .

“Do not remember the former things, or consider the things of old.

I am about to do a new thing; now it springs forth, do you not    perceive it?

The wild animals will honor me, the jackals and the ostriches;

for I give water in the wilderness, rivers in the desert,

to give drink to my chosen people, the people whom I formed for myself so that they might declare my praise.

And today, having visited the wilderness of Israel, I can tell to you that I have seen rivers in the desert that have been built to bring water to all the people and animals living there.  Where once there was only rock and dry land, today Israel’s deserts produce strawberries, bananas and grapes through controlled scientific conditions that are not seen anywhere else in the world . . . a 3000 yr old prophesy from Isaiah, fulfilled in our own lifetime . . . so that God’s own people might see it and declare his praise.

So intense was the tradition of the Jews instilled into the hearts of all its people that Paul today explains to the Church in Phillipi that . . . “If anyone else has reason to be confident in the flesh, I have more: circumcised on the eighth day, a member of the people of Israel, of the tribe of Benjamin, a Hebrew born of Hebrews; as to the law, a Pharisee; as to zeal, a persecutor of the church; as to righteousness under the law . . . blameless.”  And that is exactly what the Pharisees believed, that of all people, Paul (or Saul as he was called by them) was blameless because he was a Jew acting within the Law of Moses to weed out blasphemy from among its ranks.

But in Christ, Paul became awakened through the Spirit of God that his tradition and his Jewish pedigree would not hold him blameless, that in fact it was the law itself that would actually be the instrument that would utterly condemn him . . . and all of us in our sins.

And so he goes on to explain to them . . . “For his sake I have suffered the loss of all things, and I regard them as rubbish, in order that I may gain Christ and be found in him, not having a righteousness of my own that comes from the law, but one that comes through faith in Christ, the righteousness from God based on faith.”  For there is no righteousness, except in Jesus Christ who is the fount of all blessing and of all truth.

Which is the reason that in the Gospel lesson today, Mary celebrates Christ’s presence by anointing his feet with the oil of narda, a kind of extract found only in India that by the standard of the day cost about a year’s wage of 300 denarii or equivalent to about $6,000 dollars today.  To which of course Judas Iscariot objects because, as he put it, the money could have fed the poor – but to which the writer insinuates Judas may have wanted the money for himself – which if you think on it, as I have over the years, might have helped him in his final decision to betray Jesus.

But Jesus says no – that we will always have the poor with us – and we will only have the Lord of Life here for a few more days.  So it was important that this time be holy and set apart so that the Messiah, while with us, could be prepared in an appropriate way before beginning his final journey to Calvary.  For it was shortly after this supper in Bethany that Jesus sets off to Jerusalem to the cheers of crowds waving palm branches with the shout of ‘Hosanna’ – meaning literally ‘Our Savior’ –  and blessed is he who comes in the name of the Lord.

The anointing with oil before a battle or before a long journey or for an illness was a very common thing in the days of the apostles.  The church continues this practice in the Sacrament of Holy Unction which is the visible sign of an inward and spiritual grace wherein God bestows on us a special blessing of help in all the situations of life in which we find ourselves.  The oil we use for blessing is called the oil of gladness and is very similar to the narda of the reading today.  It is a mixture of myrrh and frankincense and we offer it to everyone today during communion.  As in the gospel lesson today, its blessing and its unusual scent is a reminder of God’s presence in our lives as we head towards Holy Week and the cross at Calvary.