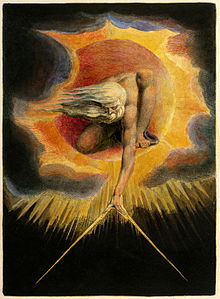 At home hidden away in my attic someplace there is a print from 1794 by William Blake entitled ‘The Ancient of Days’. It is a watercolor presumably of God the Father stooped over in a wind storm holding a set of dividers at what I always thought was the very beginning of creation. Today, however I am not as sure it is of the beginning of creation. It could very well be the end of time as well. In effect William Blake was trying to show God in the person of an architect, one of the few professions beside builders that used a set of dividers at the end of the 18th century . . . as well as today. I saw a poster of this painting in a store window some years ago and found at once that I was intrigued by its message. I even bought one on the internet back about 15 years ago.
The message of this work speaks about the design of creation and just how involved God is in it. We often picture God as an old man with a white beard who made the earth and all there is and then let it all go its own way. We hear the Genesis story how everything was good and suddenly everything was not so good at the fall of the first of our race. We have been told that the gift of free will and a penchant for pride caused our fall and we were forced out of the perfection and everlasting life of Eden to toil on our own behalf throughout our lives and die in the dust of our own desire and making. But did God really let his creation go to its own demise? Is creation like a bowel of spilled marbles as many would believe? Or is it more like dominoes, set up in a strategic pattern with a definitive design and purpose? And how often is the design adjusted to complete God’s desired outcome? These are the questions that we need to ask today.
As a now ‘former’ contractor, I was often in contact with the architects of the buildings I built. As a project executive, I was responsible to see that that the intent of the architect’s design was accomplished and built as precisely as possible to the design drawings. Sometimes it was difficult work, because being human, architects and engineers make mistakes . . . as do builders. When this happens, adjustments need to be made to compensate for errors. Fortunately, no one ever notices these adjustments and the only ones who are aware of them are the builders themselves and a few astute architects and engineers. I sometimes amuse myself by looking for errors in buildings as I go shopping or out to restaurants. Actually I think it is one of the many things I do that drives my wife crazy. But there are always clues left over, and it is interesting to me to see how a problem was solved.
I am convinced today that creation is not like a bowl of marbles dropped on the floor. It really is more like a design in progress. Like William Blake’s painting suggests, God is the architect but he chooses some of us to be his builders who occasionally make mistakes – because we are human. But like any architect, who would rather not start over, God it seems makes adjustments in the design and leaves it for other builders to continue the construction. But like any adjustment in the building model, there are clues left showing the turning points.
In today’s Old Testament reading there is one of these clues for us to ponder. It is not very obvious unless you know the whole story. It is in the verse that reads:

I will let them walk by brooks of water,
in a straight path in which they shall not stumble; for I have become a father to Israel,
and Ephraim is my firstborn.

Now you may not remember who Ephraim was, but he definitely was not the first born. In fact, he was the second born of Jacob’s eleventh born, who was Joseph in Egypt. So how was it that the second born became the firstborn and inheritor of the family name of Israel? And how does this story affect us in the here and now?
You may remember that there were twelve sons of Jacob (who was later renamed Israel). Due to jealousy, ten of his brothers got together and sold Joseph into slavery in Egypt. While in Egypt, Joseph had two sons of his own by the daughter of an Egyptian high priest (who was a gentile). The first born was Manasseh and the second was named Ephraim. The short story is that after Joseph saved his entire family from a famine, Jacob, Joseph’s father, blessed his two grandsons, knowingly promoting the second born, Ephraim to firstborn status and adopting him as a son into the nation of Israel. In this way God, thru Jacob was showing us that the last could be first and that gentiles could be grafted into the family tree of Israel (and also into the tree of life). I think that in a very real way God was predicting an adjustment that would be made in creation; that he planned all along to redeem the gentiles who are in fact ‘us’ and adopt them into the household of faith.
By doing so, by manipulating the outcome of the design of creation, God has been proven to predetermine things and sometimes to change things as it may please him. We call this doctrine ‘predestination’ and it has sometimes been a contentious issue in the life of the Church. From Paul, in his letter to the Ephesians today we read:

‘Blessed be the God and Father of our Lord Jesus Christ, who has blessed us in Christ with every spiritual blessing in the heavenly places, just as he chose us in Christ before the foundation of the world to be holy and blameless before him in love. He destined us for adoption as his children through Jesus Christ, according to the good pleasure of his will, to the praise of his glorious grace that he freely bestowed on us in the Beloved.’

What is Paul saying here . . . Were we adopted and destined to be believers before the foundation of the world? Is this not predestination? And if so what about free will? Theologians have pondered these questions over the centuries and have found a paradox, an unanswerable question . . . a ‘catch 22’ in our own vernacular.

The western orthodox faith has endeavored to answer this paradox in Article 17 of the thirty-nine articles of religion that states:

Predestination to life is the everlasting purpose of God, whereby, before the foundations of the world were laid, He hath constantly decreed by His counsel secret to us, to deliver from curse and damnation those whom He hath chosen in Christ out of mankind, and to bring them by Christ to everlasting salvation as vessels made to honor. . . . they through grace obey the calling; they be justified freely; they be made sons of God by adoption; they be made like the image of His only-begotten Son Jesus Christ; they walk religiously in good works; and at length by God’s mercy they attain to everlasting felicity.

The Bible is clear that God’s predestinating and electing love, his choice to save us, is the only possible basis for our salvation. In so many places it makes plain that we cannot save ourselves, deal with our own sin, or even choose to follow Christ without his help at every stage along the way. The whole history of salvation, in Old and New Testaments, is the story of God’s choice, for his sovereign purposes. He chose and called Noah, Abraham, Isaac and Jacob, David, and all the prophets. On the grand scale He chose the whole people of Israel. In each case there was no goodness or godliness in them which led to his choosing. These were acts of his pure and unmerited love. All these Old Testament choices pointed to the Christ. God was choosing these people to be the ancestors and the bearers of the new covenant, his chosen one, his Messiah and Christ. In the New Testament Jesus himself is the elect one. Members of his church are described as being chosen in him. Jesus is the focus of God’s choice; all those seen as predestined or chosen are described as being in Christ. Apart from Him we cannot be chosen.
It is the fact that we have been chosen in Christ that explains our faith in Him (faith is, after all, His gift) and that gives us grounds for assurance. How can I know you are going to heaven? Because I know that Christ died for you, that you are of those chosen by God in Christ to receive the benefits for which He died. If our eternal salvation depended on our own strength and the lasting quality of our choices, there would be little hope for us. Because it rests on the foundation and constancy of God’s choice, you and I can be completely secure.
The doctrine of predestination is ‘full of sweet, pleasant and unspeakable comfort to Christians and to those who feel within themselves the working of the Spirit of Christ.’ We are meant to be assured, when we have evidence of God’s work in our lives, that He has set His love upon us and will never let us go. Predestination isn’t meant to be a controversial doctrine but an encouraging one. God’s sentence that He has chosen us in Christ should be heard as a ‘comfortable word’.
Obviously we cannot understand all of God’s ways but the Bible is absolutely clear both that God chooses us in Christ, and that He commands His Church to preach the gospel to everyone. It may be a mystery but our task is plain. We are to be about building God’s Kingdom here on the earth.
What predestination and election are all about is God’s grace. He chooses us though we are far from attractive to him. He loves us when we do not deserve it. He is faithful to us when we are unfaithful to him. He ensures our salvation by not only calling us, but by calling us effectively, with words of love and a gospel of power that we cannot refuse. He promises never to let us go when we come to Christ. He keeps us secure in Christ for all eternity.
This then is the primary message of the Christmas Season, that Emmanuel is in fact, God with us. Our primary task then is to truly believe this with all our heart, mind and spirit. Only in this way can we rest, assured in the knowledge and love of Christ our Savior. Amen