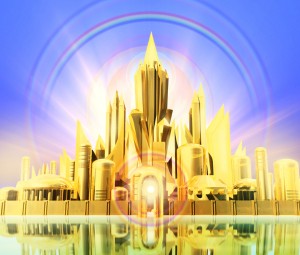 We begin today by recalling Saint John’s vision . . .
I saw a new heaven and a new earth; for the first heaven and the first earth had passed away, and the sea was no more. And I saw the holy city, the new Jerusalem, coming down out of heaven from God, prepared as a bride adorned for her husband. And I heard a loud voice from the throne saying,
“See, the home of God is among mortals.
He will dwell with them as their God;
they will be his peoples,
and God himself will be with them;
he will wipe every tear from their eyes.
Death will be no more;
mourning and crying and pain will be no more,
for the first things have passed away.”
And the one who was seated on the throne said, “See, I am making all things new.” Also he said, “Write this, for these words are trustworthy and true.” Then he said to me, “It is done! I am the Alpha and the Omega, the beginning and the end.”
The lessons from the Revelation of Saint John, as I have read them throughout my life, have always reminded me of at least two things . . . one is that, through the mercies of God and his Son, Jesus Christ, a great many of us who are living today will actually make it into heaven . . . and two, it shows that the brightest crowns that are worn in heaven are the ones that have been tried, and smelted, and polished, and glorified in the furnace of hardship and tribulation.
And isn’t that what Jesus came to affirm to us . . . that one . . . we are loved by God, redeemed by God and saved by God . . . and two . . . that those who are one with God will be hated in this world, and persecuted for their belief and rejected by men.
Today of course is a day set aside for the Celebration of All Saints . . . Christians . . . believers in the messiah, the Christ . . . believers like you and like me and like the many millions who have come before us. We, who are the church militant (those living) share this one day in the Church year with the church expectant (all those who have died in the Lord) in joyful anticipation of the final glory that awaits us at the end of all things.
And why do you suppose we do this? What purpose does it serve for the living to remember the dead? Its purpose is to strengthen our resolve to fight on in the midst of great adversity . . . to give us the strength of our convictions in order to live out the gospel message in our own lives . . . To recall those who have died reminds us of their great sacrifice in a just cause, to keep true faith alive so that a people yet unborn might one day inherit the truth and gain for themselves the gift of everlasting life.
As some of you may know, I have always been interested in the lives of the saints, even since I was a kid. Many times in my life I have stopped at the Fatima Shrine in Niagara Falls for a walk among the saints depicted there in sculpture. I have favorite saints as I presume you do also. Mine are St. Francis and St. Augustine. Each month in our newsletter we provide a synopsis of a saint that we celebrate with each issue. Since doing this, I have found that the saints of yesterday were fighting much the same spiritual battles that we continue to fight in our world today. Injustice and hatred towards Christian believers is nothing new and spans pretty much all of the two thousand year history of the church. You need only pick up a newspaper today to know that this is as true today as anytime in the distant past.
So what is there about the cross of Christ which angers the world and stirs them up to persecute those who preach it? John Stott,a famous Anglican evangelist tells us . . . and it just this: Christ died on the cross for us sinners, becoming a curse for us (Gal. 3:13). So the cross tells us some very unpalatable truths about ourselves, namely that we are sinners under the righteous curse of God’s law and that we cannot save ourselves. Christ bore our sin and curse precisely because we could gain release from them in no other way. If we could have been forgiven by our own good works, by being circumcised and keeping the law, we may be quite sure that there would have been no cross. Every time we look at the cross Christ seems to say to us, ‘I am here because of you. It is your sin I am bearing, your curse I am suffering, your debt I am paying, your death I am dying.’ Nothing in history or in the universe cuts each of us down to size like the cross. We all have inflated views of ourselves, especially in self-righteousness, until we have visited a place called Calvary. Because it is there, at the foot of the cross, that we shrink to our true size. And of course men do not like it. They resent the humiliation of seeing themselves as God sees them and as they really are. We prefer our own comfortable illusions and naturally most steer clear of the cross. And in the end they construct a Christianity without the cross, which relies for salvation on their own works and not on Jesus Christ’s. Many do not object to Christianity so long as it is not the faith of Christ crucified. But Christ crucified they detest. And if a preacher preaches Christ crucified, they are opposed, ridiculed, persecuted. Why do you suppose that is true? It is because of the wounds which they inflict on a man’s pride.

I believe Jesus knew all this well in advance and gave us a glimpse of what the future would hold for those saints who truly sought fellowship with God the Father.
And then today is the story of the miracle of the raising of Lazarus from the dead. When we read the gospel it appears that Jesus is delayed, pretty much on purpose, so that his disciples might see the ultimate power of God in raising a person so obviously dead (three days) to life again. What Jesus was trying to show his followers, both those who were with him then as well as those of us who are with him now, is that the resurrection of the dead is not fantastical story but a real life event in the future lives of all believers. For it is the resurrection of the dead that we all await for on that final day of the Lord when he calls, not just his friend Lazarus, but all his friends everywhere and of every time throughout all of history to rise to life and be welcomed into a future and eternal world.
From the wisdom of Solomon we get an assurance of these same promises as we read . . .

The souls of the righteous are in the hand of God,
and no torment will ever touch them.
In the eyes of the foolish they seemed to have died,
and their departure was thought to be a disaster,
and their going from us to be their destruction;
but they are at peace.
For though in the sight of others they were punished,
their hope is full of immortality.
Having been disciplined a little, they will receive great good,
because God tested them and found them worthy of himself;
like gold in the furnace he tried them,
and like a sacrificial burnt offering he accepted them.
In the time of their visitation they will shine forth,
and will run like sparks through the stubble.
They will govern nations and rule over peoples,
and the Lord will reign over them forever.
Those who trust in him will understand truth,
and the faithful will abide with him in love,
because grace and mercy are upon his holy ones,
and he watches over his elect.
Finally, today marks the 498th anniversary of the beginning of the reformation when Martin Luther’s 95 theses were found nailed to the door of Wittenberg Cathedral in Germany. This one act of defiance by this one saint of God was to begin a series of events that would bring the Holy Roman Catholic Church to fight a bloody war for its very survival. It would cause the martyred deaths of hundreds of thousands of believers throughout Europe by the hand of the pope . . . and finally it would give rise to the split between the Church at Rome and the Church of England and the formation of the Anglican Church, of which we are a part. We who are alive today can now can look back with the 20-20 clarity of vision and see God’s hand in all this and how in subsequent years the Roman Catholic Church was made to look upon itself and to judge itself for so many misdeeds made in the name of Christ over the centuries. But it is to all the saints of the reformation who stood fast in their faith that we honor and give thanks today, many who were brutally tortured and murdered because they believed that the Holy Spirit of God had shown them a new direction in the worship of God . . . that being worship of God in Spirit and in Truth. Today we believe these Saints, along with all others in a long line of martyrs, now living in the presence of God, celebrate with us today the risen life of Jesus Christ, God’s only Son who along with us who are living join and continue to sing “Amen! Blessing and glory and wisdom and thanksgiving and honor and power and might be to our God forever and ever!
Amen.