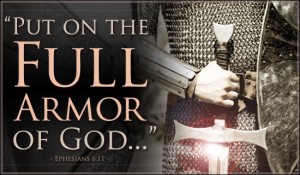 Several years ago when my children were small, I got the idea to plant a vegetable garden in the back yard. I decided I would plant everything that I liked . . . tomatoes, corn, squash, but also including some eggplant that Barbara likes. After a lot of tilling and weeding the soil, I finally got down to planting all the little starter plants that I expected would one day yield a lot of fruit. But little did I expect that I would be in for one fight after another to be able to call the fruit my own. You see the first onslaught on the tender shoots were rabbits who ate everything they could above ground. So . . . after replacing most of the crop, I erected a chicken wire fence to keep the rabbits out. Later in the summer the tomatoes were attacked by snails who ignored the fence and simply bit off the young tomato plants at their stems. After installing some beer filled fruit jars, I managed to stave off that attack, only to start battling aphids, who decided to cover the leaves of some of the young plants. After spraying nicotine laced water on them, the aphids finally subsided. By this time it was nearly fall and I went out into the yard expecting to pick a few ripe tomatoes and cucumbers. But to my utter amazement, what the rabbits hadn’t eaten and the bugs hadn’t destroyed, my prize tomatoes and cucumbers were gone. They had been stolen by a thief in the night (presumably one of my neighbors). So I put up another, bigger fence to keep people out as well.

But all was not lost, because out of the whole garden upon the advent of fall, I was finally able to harvest a wonderful crop of the most wonderful tomatoes, beans, cucumbers, squash and of course, eggplant, that you have ever seen. In fact we had eggplant to eat all the way up to Thanksgiving that year . . . yum.

I wanted to relay this story to you today because God is also a gardener of sorts. Jesus tells us he is raising and tending people of all types and sizes for a future harvest that is still to come. But the people in his garden are in far more jeopardy than a few tomatoes stems planted in Buffalo. So much in jeopardy, that they need the protection of spiritual armor and God Himself, to stave off the assaults that would do them all in.

Paul writes ‘For our struggle is not against enemies of blood and flesh, but against the rulers, against the authorities, against the cosmic powers of this present darkness, against the spiritual forces of evil in the heavenly places. Therefore take up the whole armor of God, so that you may be able to withstand on that evil day, and having done everything, to stand firm.

In many respects this shows us that we are not ‘merely vegetables’ in the garden of God, but are, in fact, soldiers in the army of God. So you might ask, when did we all get drafted?

A few months ago a friend at work relayed a story to me about how her son, who has been an honor ROTC student in high school and was awarded numerous prizes and honors from the Air Force but was turned down when he went in to sign up. You see, the boy had had ADHD and speech therapy when he was little and this fact on his medical record excluded him from joining the very thing he had worked toward his whole life. The good news is that he was finally this year accepted into the Niagara County Sheriff’s Department. The point is we hear on television ads asking us, pleading with us, and begging men and women to join the armed forces . . . but once they do, the government appears to be extremely selective in who they will actually accept.

We might say to each other that this isn’t very fair. Why should a young man or young woman be denied because of something they can’t help or change? And we think how very intolerant.

But Jesus tells us that God takes much the same position. We have heard it said by Jesus that ‘many are called but few are chosen’. Jesus tells us that God is extremely selective in choosing his friends and that is why so many are called, but so few appear to be chosen to walk with Him. Some would say that, and especially in this world of tolerance for the individual, whatever their belief, whatever their behavior, that this is an intolerant intolerance . . . and you know what? They would be correct. For God has a bar for us to pass over, one that is set very high . . . but there are others who would set the bar so low that it becomes a stumbling block for the many who would try to take the easy way out. That bar, of course, is Jesus Christ our Lord and it is only with his help in overcoming that bar that we can succeed in obtaining Gods fellowship and access into the Kingdom of God.

But you might ask then, will some not be saved? . . . and I would tell you that many will not be saved. Jesus, who in the gospel lesson today, was perhaps the greatest preacher who ever lived, and also lost nearly his entire following by telling them a spiritual truth, that they must eat of his flesh. To which when many of his disciples heard it, they said, “This teaching is difficult; who can accept it?” But Jesus, being aware that his disciples were complaining about it, said to them, “Does this offend you? Then what if you were to see the Son of Man ascending to where he was before? It is the spirit that gives life; the flesh is useless. The words that I have spoken to you are spirit and life. But among you there are some who do not believe.” Because of this many of his disciples turned back and no longer went about with him. So Jesus asked the twelve, “Do you also wish to go away?” Simon Peter answered him, “Lord, to whom can we go?”

Not much is known about the many disciples who would not accept and believe, and who left Jesus and the disciples. The New Testament tells us there were at least seventy disciples besides the original twelve. But we also know that there were others who stayed; among them were Stephen, Barnabus, Mathias, the two Marys, Martha and Phoebe. Did the others return? I think someone would have reported it if they did return, so I am thinking that they probably did not and so perhaps they were lost.

But of the ones who stayed there came forth the truth of the Spirit of God and an entire belief system in redemption, in the resurrection and the life hereafter in God’s Kingdom.

Paul, who came to the scene later writes to the church in Ephesus while in chains and describes a war, not as the vanquished, but as a general directing his army, he writes . . . “Stand therefore, and fasten the belt of truth around your waist, and put on the breastplate of righteousness. As shoes for your feet put on whatever will make you ready to proclaim the gospel of peace. With all of these, take the shield of faith, with which you will be able to quench all the flaming arrows of the evil one. Take the helmet of salvation, and the sword of the Spirit, which is the word of God.”

There was another disciple of sorts who also wrote while in chains, but in an English prison. His name was John Bunyan and his work was the book ‘The Pilgrim’s Progress’ written in 1678 and remarkably, still in print. John Bunyan relates the story of a man named Christian who sets off on a journey from ‘The City of Destruction’ to the ‘Celestial City’. The story is an allegory of the Christian walk and all the obstacles that we face in a faith-filled journey towards our heavenly home. It is one the best books I have ever read and it is actually available for free online.

The man Christian comes across other characters like Evangelist, Pliable and Obstinate and many others who sometimes help him and sometimes become stumbling blocks to him on his way to the Celestial City. The point of the story is that we as Christians, are burdened with our sins and we need to relieve ourselves of the burden that we hold in order to be saved. But many of us do not want to unburden ourselves because we have become so used to the burden that we cannot bear the drastic change in our life. It is only through Christ that our burdens are set down and we are released to live in perfect freedom.

The book is an allegory of what our spiritual walk is all about but in a very real and dramatic way it also portrays our physical world in what and who we need to fight off in order to win the final battle.

Today, we face an onslaught of unbelief and of evil on all sides. Our freedom to choose is in jeopardy and those who would limit it are telling us it is for our own good as they slowly take it away. As you go about your lives this week, keep your ears open and the shield of faith at your side. Become more aware of your surroundings and note how many times you hear or see an attack on God, his Christ or the Truth. You will be quite surprised to find that Paul is right . . . believers in God literally are at war with the world. Amen.