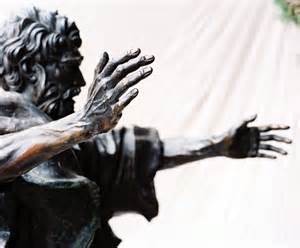 We begin today with one more reading appropriate to the lessons today from the prophetic book of Ezekiel . . .The Lord said to me: O mortal, stand up on your feet, and I will speak with you. And when he spoke to me, a spirit entered into me and set me on my feet; and I heard him speaking to me. He said to me, Mortal, I am sending you to the people of Israel, to a nation of rebels who have rebelled against me; they and their ancestors have transgressed against me to this very day. The descendants are impudent and stubborn. I am sending you to them, and you shall say to them, “Thus says the Lord GOD.” Whether they hear or refuse to hear (for they are a rebellious house), they shall know that there has been a prophet among them.

When I was growing up at my parents’ house in Tonawanda, we had some neighbors across the street who were very close friends. Each Friday night, we either went to their house for supper or they would come to our house. Sometimes, when we went to their house, Mr. Cook, would set up a slide show of vacations and places he or their family had visited. Upon the first showing he was so very enthusiastic about his trip, and we, also caught this enthusiasm as he described the San Diego Zoo or the Grand Canyon. I guess we got caught up in his enthusiasm because my family had never gone anywhere, and it was sort of a thrill to see pictures and hear stories from someone who actually went to some exotic place. A few months later, he would show the set of slides again.   This time with somewhat less enthusiasm because his memory had somewhat faded. It was still enjoyable, but it was not like the first time. A year or so later, on the fourth and fifth showing, the show had become somewhat dull and boring. It was like watching Star Wars for the eighth and ninth time. You know all the action and the lines by heart.

Our friend, Mr. Cook, had worn out his story because the newness of his vision was gone. Storytellers, reporters, writers and artists all face the same challenge. In order to keep their listener’s interest, they need to come up with new slants on the same basic story or medium. This entails going to new places, or writing about new adventures or painting with new landscapes or new subjects. This case holds true also with prophets, prophetic vision, which is what the readings are about today.

Although the readings are set in the days of Jesus and Ezekial, the age of prophetic vision has really never left us. Even today, prophetic voices abound in the teachings of John Stott, Jonathan Cahn, Herbert O’Driscoll and others who have inspired us with their stories and visions. Pastors, priests, and clergyman are people who have, in some point in their lives, made a prophetic journey. They have been given some greater insight into the way things really are. And, as a result, they returned full of zeal and enthusiasm to tell their story to anyone who will listen. One of the main reasons that I went into this ministry was to tell the story I was given when I was about eighteen. That story, along with other experiences, has been the guiding theme for all the sermons I have ever written and it continues even to today.

Paul, in today’s letter to the Corinthians, tells of a man who had traveled to a place he calls the third heaven. Here the man had received some inner vision of enlightenment and traveled back elated with this vision. In reality, Paul is talking about himself. He was the man he had known fourteen years earlier. But now, the vision seems to be somewhat obscured and the memory somewhat faded. But what he does know is that he went. At the time, I am sure it was as if a light had turned on. It was this inner vision that helped him write all those letters to the Romans, the Ephesians, the Galatians and the Colossians. But this letter today, is fourteen years later and perhaps the memory of his journey somewhat more faded. He complains of a ‘thorn’ set in his side as a message from Satan. This thorn has always been a mystery. Some think that Paul may have had a chronic illness, a really bad habit or short temper. I think that whatever it was, it was put there to keep him humble.

God gives to all of us the ability to communicate with him. But, to some he beckons to a greater journey. And for those who make the journey he gives even a greater responsibility to go back and tell what they saw. In the reading from Book of Ezekiel, God tells the prophet to go to His people, the Israelites, and tell them what he has learned. God warns Ezekiel to not be afraid of what the people might say or react to his message because the message is more important than the messenger.

This was one of the hurdle’s to being a preacher that I found very hard to overcome. First, was my message genuine? And if it was, how did I know it was? Second, was my fear of speaking in public. If you had known me in high school, you never in your wildest dreams think I would ever stand up in front of a lot of people and speak. It is only through God’s grace (and a lifetime of practice) that I stand here and not be terrified to tell you my inner most thoughts that are floating around in this brain of mine.

Many of you may not realize it but, I was turned down by the diocesan Standing Commission when I first approached them about ordination. They did not think I had a strong enough personality to fill the description of what they thought a minister ought to have. At the time, I was younger and was unable to explain to them thoroughly enough, my call to ordination, or my prophetic vision. During the eight years I waited for them to catch up, I decided to continue in the course of my walk by doing refugee resettlement work. It was during this time that Barbara and I sponsored two Vietnamese families to come to America. Today, and I am not ashamed to take at least a small amount of the credit in that those families have produced a Nuclear Medicine Technologist, three Medical Doctors, a Physicians Assistant, a Pharmacist, a bank manager, and an RN. Literally hundreds of lives will be saved or lengthened through this one good deed and all because of God working through one or two persons giving them the courage to say ‘Yes Lord, I believe’.

I often recall one of the prayers the Paul writes in his letter to the Ephesians:

“Glory to God whose power, working in us, can do infinitely more than we can ask or imagine:

Glory to him from generation to generation in the Church, and in Christ Jesus fro ever and ever”. Amen

When you were baptized, God gave you a commission. You may not remember the words, but the Spirit was given to you and it dwells within us all for one purpose and that is to help to heal a broken world. You and I are part of the eternal priesthood. We are the prophetic witness (and, indeed, the physical evidence) that God is alive and and still at work in this world. It is up to each of us to bear this message into a sick and broken world, for that is our purpose as followers of Christ.

But it is certainly not an easy task as even Jesus could not convince his own people in his own home town. And they said to one another, “Where did this man get all this? What is this wisdom that has been given to him? What deeds of power are being done by his hands! Is not this the carpenter, the son of Mary and brother of James and Joses and Judas and Simon, and are not his sisters here with us?” And they took offense at him. Then Jesus said to them, “Prophets are not without honor, except in their hometown, and among their own kin, and in their own house.”

And so it is with all who follow in the Way of Truth.