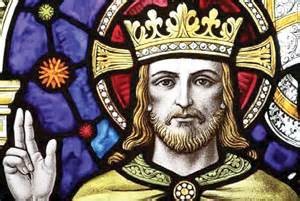 As the church moves through its liturgical seasons from Easter to Pentecost we see a marked difference in our environment, not only outside the church, where everything is a vibrant green, but also inside as well. The church seasons, much like our school seasons, have historically rotated with an agrarian economy . . . and though few of us plant and tend our own food anymore, the seasonal shifting of colors marks time for us and tells us it is this time, the time of Pentecost when we are asked to grow.

The lessons during the summer all point to growth in one way or another and it is incumbent upon believers to use this time wisely. In the previous six months we have heard about the second coming of the king at the end of the world and the first coming of Jesus in the Christmas Story . . . we have seen how the light has come into the world and we have watched as our savior preached his three year mission throughout the regions of Judea and Galilee. We spent forty days with Christ as he wandered into the wilderness on our behalf, and we witnessed his trial and his death and crucifixion on the cross at Calvary. We also were witness of his rising to life again on Easter morning and how he appeared to many hundreds of his disciples afterwards and how he was finally taken up into heaven, and how he sent the Holy Spirit to be with us, his church, until the time of the end.

These are all stories we know very well. These are the stories of which we never tire of hearing because they have a direct bearing on what we believe. And because we believe, we know that we live.

But this, the season of Pentecost, provides an opportunity for us to grow in our own world, not only with stories of the past church, but with a confidence in learning about ourselves and about our future together in the present age and far into the future. When Jesus left the disciples, he told them that he had much more to say to them, things that they could not bear to hear at that time. We believe that the Holy Spirit directs the church and teaches it in all things even into this present time. It is in the here and now that the Holy Spirit continues to speak to the church in all truth.

There was in the 60’s a television show that began with a quote attributed to Winston Churchill . . . “democracy is a bad form of Government – but all the others are so much worse”    I might be wrong, but I think it was the show Dragnet. And of course Winston Churchill was correct in that all forms of government are inherently bad news – mainly because they involve people who are often tempted and swayed by power and money.

In the Old Testament reading today we hear how the Hebrews wanted Samuel to appoint a king above them. Why? . . . because they wanted to be like other nations where a king led and ruled his people. They did not want to be ruled by an infinite God who they could not see, but instead chose to be ruled by a man, a King, who would be high and lifted up above the common man . . . and so they chose Saul.

Now I am sure that you have heard the saying that power corrupts and absolute power corrupts absolutely . . well it was no different with Saul. Saul was born in 1076 BC in the land of Benjamin in Israel. He became the first King of Israel circa 1046 BC where he united tribes and defeated enemies such as the Ammonites, Philistines, Moabites, and Amalekites. After disobeying God, the elder Samuel anointed David as his replacement. Jealous of being pushed aside and all the accolades bestowed upon David for slaying Goliath, Saul made several failed attempts to take is own son’s life. Saul died in 1004 BC and at his own hand when he fell on sword to avoid being captured by the Philistines.

God of course knew the temptations that any man would face as king and it really didn’t matter who the king was. He said, “These will be the ways of the king who will reign over you: he will take your sons and appoint them to his chariots and to be his horsemen, and to run before his chariots; [and he will appoint for himself commanders of thousands and commanders of fifties, and some to plow his ground and to reap his harvest, and to make his implements of war and the equipment of his chariots. He will take your daughters to be perfumers and cooks and bakers. He will take the best of your fields and vineyards and olive orchards and give them to his courtiers. He will take one-tenth of your grain and of your vineyards and give it to his officers and his courtiers.] He will take your male and female slaves, and the best of your cattle and donkeys, and put them to his work. He will take one-tenth of your flocks, and you shall be his slaves. And in that day you will cry out because of your king, whom you have chosen for yourselves; but the LORD will not answer you in that day.”

And we know that even in our own day, when we have had the good sense to put away the idea of a king above us, even now, the temptations of power and corruption continue to influence those who think they can control us. Corruption and scandal by those who lead are really nothing new, but the worst have been, and usually are, kings and dictators and anyone who holds absolute power over a people or a nation.

God of course was the king of the Hebrews and still is . . . however they rejected God and instead chose one of their own, and they have paid dearly for it throughout the centuries. At the time of Jesus, Herod was the king above the Jews. Herod was perhaps the worst of the worst for it was Herod who He has been described as “a madman who murdered his own family and a great many rabbis”, “the evil genius of the Judean nation”, and a king “prepared to commit any crime in order to gratify his unbounded ambition” (including of course killing anyone in his way).

It was no wonder that the people of the time of Jesus were looking for a messiah, a righteous King, who would take back his ancestor, David’s throne. And it is no wonder that Jesus told Pilate, when asked if he was a king, Jesus said, ‘my kingdom is not of this world’ . . . because it wasn’t and it isn’t . . . and neither is it ours . . . for we are not the citizens of this world, but of the next.  And as Paul writes to the church from centuries ago . . . So we do not lose heart. Even though our outer nature is wasting away, our inner nature is being renewed day by day. For this slight momentary affliction is preparing us for an eternal weight of glory beyond all measure, because we look not at what can be seen but at what cannot be seen; for what can be seen is temporary, but what cannot be seen is eternal. For we know that if the earthly tent we live in is destroyed, we have a building from God, a house not made with hands, eternal in the heavens.

As you know, the United States is a democratic republic that was founded by our founders on the premise of Holy Scripture and has been blessed these many years since its founding because it was dedicated to God. And though we have had our share of bad apples as leaders, we have been perhaps the most fortunate nation on earth because of our continued resilience and dependence on God to sustain us through all hardship. But in the last several years, this has changed quite dramatically as God has been moved out of our classrooms and banished from the public square. Our leaders of course think they are doing the right thing by making everyone equal in religion, in sexual persuasion, in the political arena and in income and healthcare equality. But the problem is that, like the Hebrews in the first lesson, we are sort of asking for someone else to be our king . . . someone to tell us when to get up, when to go to sleep, what to eat, what to wear, what to buy and what to sell . . and instead of being dependent on God for his great providence, we are asking that we take God’s role for ourselves . . . and this has been to our greatest detriment these past several years, for today, for the first time since our founding, we are not better off than our parents . . . and I believe it is about to get worse – much worse.

But for us in the church, for believers worldwide we have but one King and that is Jesus Christ the Son of God who came to be our savior and will come again to be our King . . . And the government will rest on His shoulders; And His name will be called Wonderful Counselor, Mighty God, Eternal Father, Prince of Peace. There will be no end to the increase of His government or of peace, On the throne of David and over his kingdom, To establish it and to uphold it with justice and righteousness From then on and forevermore. And the zeal of the LORD of hosts will accomplish this.

You and I live in a time that was looked for by all the prophets and saints of the past.  I for one cannot be more excited about living in these times for it seems to me that the fruition of the prophesies given so long ago are nearly complete.

Jesus told them this parable: “Look at the fig tree and all the trees. When they sprout leaves, you can see for yourselves and know that summer is near. Even so, when you see these things happening, you know that the kingdom of God is near. “Truly I tell you, this generation will certainly not pass away until all these things have happened. Heaven and earth will pass away, but my words will never pass away. “Be careful, or your hearts will be weighed down with carousing, drunkenness and the anxieties of life, and that day will close on you suddenly like a trap. For it will come on all those who live on the face of the whole earth. Be always on the watch, and pray that you may be able to escape all that is about to happen, and that you may be able to stand before the Son of Man.”