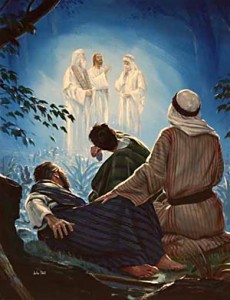 One of the primary concepts of theology, one that many probably do not realize or think about much, is that . . . for us humans, God . . . exists only in the present. We may recall the past and we may plan for the future, but it is in the ‘here and now’ that we will find our connection to God and with each other.

In today’s gospel; we again heard the story of the transfiguration of Christ. We wonder . . . was this a vision of the future or did it actually happen in the present of those times when Jesus walked with his disciples. Jesus warns the disciples not to tell anyone what they saw until after the resurrection. Do you suppose that had they told that somehow the plan of salvation would have been changed . . . or perhaps ruined for them . . . or for us? We know that the future is not normally revealed by God in great detail, but at the same time we can also assume that it is laid out for those who have eyes to see it.

The transfiguration was given to the core disciples in order to build their faith for what was about to come. They were given a vision of the future showing them what had become of the past and how the future was to be shaped in God’s hand. The specific people who appeared, of Moses and Elijah, were telling. These were the only two prophets in the Old Testament that no one knows what happened to.

Elijah, as you may recall was swept up in a chariot of fire into heaven, never to be seen again. The scripture tells us that he will return as one of two final witnesses in the end days. That is one of the reasons that the people who heard Jesus from the cross calling “Ali, Ali . . .” on the cross assumed he was calling out for Elijah. And that is also, I believe why Jesus did not want anyone to know that Elijah had come in this vision.

Moses, as you may recall, was unable to enter the promised land due to a lost temper while working God’s miracle of cleaving the rock for water. Scripture informs us that he died, but that God himself only knows where his body is. The kabala (an ancient Jewish mystic book) relays a story that Moses refused to give the angel of death his soul and that God himself came from heaven to collect it. God placed the body of Moses in a special place where it would not see corruption until the day of the resurrection of the dead. Moses, we are told is the second witness who is to come at the end of time.

It is not all that clear that the disciples who witnessed this event were aware of the implications of what the transfiguration meant. But they were as startled as anyone would be if it happened to any of us.

So what does it mean for us in the present? For me it is a significant sign that all is as it should be. It is a sign from the past that links the present with the future work of God and the redemptive plan for all mankind. The fact that Jesus called three men to witness this event is also noteworthy. You may not believe one person who has seen a vision of eternity . . . two people who see a vision might also be untrustworthy as a sympathetic psychosis . . . but for three people to see the same thing and report back has to be either true . . . or . . . a conspiracy; but to what end?

The transfiguration is truly a lamp shining in the darkness as Peter describes. It was given, not for the people of that age, but for you and all others that have followed Jesus into the future holding on to the truth and life of Christ’s church throughout its generations. It was a sign that all was ready . . . all is right . . . and all will be carried out according to the plan of life and salvation.

There are two camps about the way this plan of life works.

There are some who believe that life is like a stream gently flowing to join a brook which joins other streams and other rivers and lakes until it becomes an ocean. This camp believes that everything . . . both good and evil is mysteriously being somehow brought together by God until everything that is, is cleansed and perfected as it gently flows into heaven. They believe that as mankind continues to evolve, all the things that divide us will fall away and we will become one voice, one people, all going in one direction. Our divisions will cease and all will be one with the Father of all things. This is the more liberal approach to life’s plan. It tells us that all will eventually join God in the end of time.

Then there is another camp that believes that life is more like a tree. As we continue to climb up the tree we are constantly faced with a decision as we come to a fork in the branches. Do we turn right or do we turn left. Do we embrace good or do we accept evil. This philosophy states that there is only one way and that when errors in judgment or opportunity happen, we find that we need to retrace our steps and go back (or repent) in order to stay on the Pilgrims Way, the way of life. This philosophy is uncompromising in its pursuit of perfection to be with God. It is the more conservative approach to the plan of life. It tells us that very few will join God in the end of time.

But, he also warns us that those who cannot . . . or will not . . . bear fruit will be cast aside . . . to make room for those who can. This is, for most of us, a terrifying statement, because all of us want to feel included in God’s plan. I know that each time I read this warning in the Gospels, I sometimes cringe because I know there are some who will not want to hear it. And I wonder how can this be coming from the ‘Lord of Love’?

Back, many years ago, Barbara and I decided to plant two apple trees. We planted one Golden Delicious and one Red Delicious tree. They were small saplings at the time, but they grew and grew. We never had the heart to prune them or spray them because we wanted pure apples with no chemicals. But little did we know that this isn’t how you grow apples. Before long the two trees were towering over our yard full of branches and thousands of leaves.

We did manage to get apples every year from them. We got thousands of very small horribly sour little apples that fell from the trees full of worms. Every year we cleaned up this mess and threw out two garbage pails full of apples. The fruit was inedible but the trees themselves were both magnificent, full of shade and promise. We stilled loved them. But as time went on, each year I thought about cutting them down because of the terrible mess they made, and because the fruit they produced really wasn’t any good for anything.

Conversely, in my travels throughout Niagara County, I am always impressed in the fall to see wonderful red, ripe, juicy apples in the orchards dressed by professional apple growers. These wonderful apples are hanging on some of the worst looking trees you have ever seen. They are all black and knarly and have horrible grotesque trunks. But, they have wonderful apples.

The reason is, that, to grow fruit correctly, the dresser needs to prune the trees . . . a lot. Sometimes they need to cut off whole branches to make them bear fruit. They need to do this, not out of malevolence against the tree, but out of love to make it grow and produce the finished product which is the fruit of the tree (and not the tree itself).

The point of all this is that love, though gentle as a lamb can be as ruthless as a lion when it comes to our own spiritual lives and the Church. If God can be compared to Love, then Love can be compared to Living Water that rains down and gives life equally to both the just and the unjust. But love never demands its own way, so God never prunes us unless we ask him to. Those who are pruned bear much fruit and they bear it most abundantly. Often they are not people who live in gigantic houses or drive expensive cars. Often they are the very poorest of people with the very largest of hearts. The plan of salvation is truly meant for them. But in the same way, if the vine is no longer useful and tree no longer produces good fruit, it will be cast down and removed so that others can take its place.

O God, who before the passion of your only­begotten Son revealed his glory upon the holy mountain: Grant to us that we, beholding by faith the light of his countenance, may be strengthened to bear our cross, and be changed into his likeness from glory to glory; through Jesus Christ our Lord, who lives and reigns with you and the Holy Spirit, one God, for ever and ever. Amen.